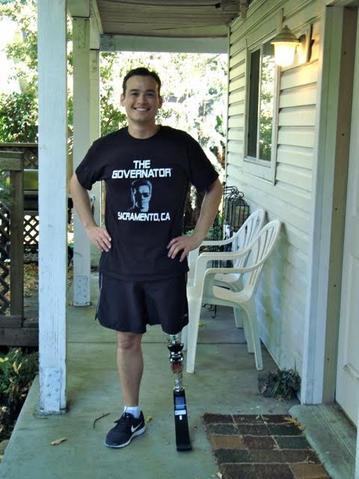 “My father’s White and my mother’s Mexican, I’m a product of California”, says James Pearson, the owner of Sacramento based Samaritan Disability. Indeed, it’s been a long journey from the Californian heartland to the state’s capitol for this social security disability advocate, who devotes his time taking on cases for some of the neediest in our community.

ONE MOMENT, A CHANGE IN DESTINY

Pearson hails from a family of rice farmers from rural Colusa County, where golden fields spreading across a generous vista occupy swathes of the central valley. On one sunny day when he was four, Pearson sat in between his parents who were operating a rice combine during harvest season. When the machine came to an abrupt halt, his father went out back to fix the problem, which turned out to be a jammed auger.

Always eager to help, young Jimmy slipped into the wagon just as the jam cleared and the augur started to churn. In a split moment that would irreversibly change his life, Jimmy’s leg got caught in the machinery and was crushed. “I remember I kept shooting the water pistol I was holding, then I just lost consciousness from the shock.”

Pearson’s life nearly ended that fateful day in the spring of his youth. But through the quick actions of his parents and an emergency helicopter airlift that Pearson recalls as “Angels we can see,” young Jimmy was given the medical care he needed to survive.

After 36 days in the hospital, eight surgeries and six months getting accustomed to his new prosthetic leg, Pearson was given a second chance at life.

In school, Pearson learned firsthand the cruelty that those with disabilities face, as he dealt with the taunting and teasing of his peers, as well as the limitations caused by not being able to physically take part in many school sporting activities.

These personal experiences shaped his worldview and gave him deep empathy for others with disabilities.

However, encountering such hardships at such a young age also taught Pearson the value of courage and resolve early on. “Having a disability doesn’t mean you are disabled,” says Pearson, who mentions that despite his physical limitations, he was able to achieve a brown belt in Tae Kwon Do. This experience gave him a surge of confidence and earned the respect of his peers.

CHALLENGES FACED BY THE DISABLED

After graduating from Chico State in 2006, Pearson joined a Sacramento based law firm specializing in social security disability and injury. Fully wanting a career dedicated to defending the rights of the disabled, Pearson dove into his position as a paralegal involving himself with the personal cases of those seeking help in their most desperate times of need.

Through his experiences, Pearson came to understand the heart wrenching circumstances that many of his clients found themselves in.

He eventually came to see that the most vulnerable clients were those who found themselves disabled in their late middle age ranging from their 50’s to early 60’s. Many of those he worked with were salt of the earth, hardworking blue collar people. Truck drivers, mechanics or waitresses, they depended on their physical wellbeing to make a living.

Many of them encountered unexpected and life altering events which suddenly and severely impacted their physical health, these ranged from horrific accidents to the discovery of cancer.

Dealing with traumatic life events and ill equipped to build a professionally compiled case demonstrating their need, many of these individuals fell through the cracks. Facing unbearable physical pain and an employment market unkind to those with disabilities, many became homeless and struggled to survive on a daily basis.

“Let’s face it, it’s not going to be easy finding employers willing to accommodate the needs of those with disabilities,” says Pearson.

Guided by an unwavering commitment to act as a trusted guide to those drowning in hopelessness, Pearson established Samaritan Social Security Disability Advocates in 2014. Working as a Disability Advocate, his firm charges no upfront fees while devoting earnest and crucial work to make sure those with disabilities can afford to live a life of basic dignity.

Helping innumerable clients have all brought a unique sense of reward every time. However, one of his most memorable cases involved a 41 year old combat veteran who had served three tours in Iraq.

On one particular patrol, his vehicle was hit by an insurgent bomb, violently smashing his head against the windshield while several of his peers lost their lives. After being honorably discharged, this man, like many veterans, continued to suffer from a host of ailments ranging from PTSD, to memory loss and severe paranoia.

Being deeply intimate with his condition, the VA approved his disability benefits and classified him as being incompetent at handling his own finances. However, this veteran, like many others, were denied disability by the Social Security Administration who believed him to be fully capable of working, though their insight was limited to his incomplete case file.

Motivated both by a deep sympathy for this man’s circumstances and a belief that those who serve this country should be taken care of, Pearson devoted his full effort into correcting this seeming injustice.

Appearing before a judge, Pearson was able to assemble a comprehensive case demonstrating the man’s continued physical and psychological trauma suffered from war, as well as providing a thorough analysis as to why the guidelines of the VA should satisfy the requirements of Social Security Disability.

The veteran was ultimately granted his deserved benefits. “It was one of the most fulfilling moments of my career,” recalls Pearson.

THE IMPORTANCE OF SOCIAL SECURITY FOR AMERICA

Hailing from a conservative background, Pearson is well aware of why critics of social security feel the way they do. However, Pearson believes that social security disability is more than just about helping citizens in need, but is a bellwether of the state of American society as a whole.

The existence of programs such as social security provide a basic welfare to the most vulnerable citizens of our country and clearly differentiates our nation from third world societies where the sick are allowed to struggle or die on the streets.

“Basically, the existence of programs such as social security disability stems from America being a prosperous society which can take care of its own, and more importantly, an America which respects basic human dignity,” says Pearson.

As many have argued, an adherence to a basic standard of compassion prevents us from becoming a society which turns a blind eye to our weak and willingly casts them out in the cold like wretched beasts outside the windows of warm fortunate homes glowing with sumptuous abundance.

Soon to be entering his final year of law school, Pearson is unwavering in his conviction that his career will be spent ensuring that those who cannot work due to physical disabilities will be assured the basic security of food and shelter, and a life where they can conduct themselves with self-respect and dignity.

James Pearson lives in the Sacramento area with his wife and college sweetheart Liz and their newborn son Layton. You can learn more about him and his work on his website www.samaritandisability.com. In the spirit of full disclosure, James Pearson was a client of the writer.