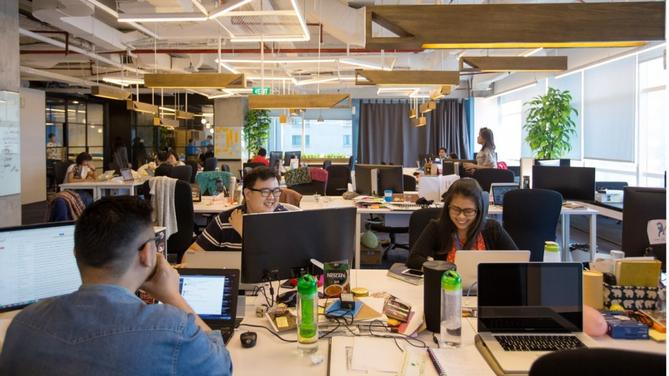 Singapore, in taking over the chairmanship of ASEAN for the first time in ten years, has big plans for making a region a global hubs for technological progress and growth. Singaporean officials have spent the past several weeks highlighting innovations like a single digital market, and expectations are high the city-state will “deliver the goods.”

For that rosey forecast to come to fruition, though, Singapore and its fellow ASEAN members need to overcome immense obstacles standing between them and a digital future. There are more than just trade barriers in the way: the region faces large gaps in development, human resources and infrastructure.

Singapore’s dreams of an integrated regional market won’t come any closer to reality unless ASEAN can bridge the divide between its haves and have-nots. To help, the Asian Development Bank (ADB) and World Economic Forum (WEF) released a roadmap last year that urges ASEAN to seize opportunities to increase digital penetration and Internet access.

The roadmap makes clear that disruptors like AI, robotics and blockchain are already revolutionizing entire sectors of the global economy, from transportation to finance. ASEAN member states can accelerate the growth of enterprises or create new ways for citizens to connect to healthcare – but only if they foster the right conditions.

As the ADB and WEF make clear, the main impediments are stark intra-regional gaps in Internet connectivity. Singapore boasts one of world’s fastest Internet connections, with average connection speeds of 20.3 Mbps. In contrast, the Philippines’ Internet service is the slowest and the most expensive in Southeast Asia.

While the geographical and logistic challenge of linking 7,107 islands into a functional network is partially to blame, the main culprit is a duopoly consisting of Philippine Long Distance Telephone Co. (PLDT) and Globe Telecom. Together, they have successfully barred competitors from entering the market and impeded the planned roll-out of 4G connections.

In 2010, San Miguel Corp. (SMC) sought to enter the country’s telecoms market, and was offered 90% of available 700 megahertz spectrum as an extra incentive. PLDT and Globe Telecom viciously opposed that allocation. They fought the government in court over the issue and successfully prevented SMC from using its acquired spectrum. In the end, the duopoly bought SMC’s telecom assets, booting the company from the market.

Without competition, 4G coverage in the Philippines is only available in limited areas and is highly overpriced. In comparison to Singapore, where the cost of Internet service relative to gross income per capita stands at 0.2%, the number is as high as 7.5% for the Philippines – even though more than 26 million Filipinos live below the poverty line.

Time is of the essence in fixing these structural issues. In 2015, ASEAN set forth  plans to establish a common market based on the free flow of goods, services, skilled labor and capital through member states. Digitization forms a central pillar, because the digital economy makes access to information nearly as paramount as access to clean air and water. An ITU study of 120 countries from 1980 to 2002 demonstrated that a 10 percent increase in broadband access penetration produced a 1.1% increase in GDP growth.

With its telecoms sector actively hindering foreign investment, Manila is losing out on a chance to alleviate endemic poverty. Stunted by inefficient policies and infrastructure, the Philippines are being left behind by other ASEAN members implementing detailed strategies to improve broadband connectivity.

Thailand, for example, announced ambitious government plans last May to bring low cost broadband access to all of the country’s 70,000 villages this year 2018. To establish a 5G network throughout the country, Thai officials plan to hold a spectrum auction in 2018. Bidders are expected to place a bid guarantee, but spectrum prices will be set low in order to promote fair price competition among operators.

The auction’s design was already successfully tested in previous 4G spectrum auctions, where setting a low benchmark price encouraged bidding. While this increased costs for mobile operators, it also fueled competition and spurred incentives to build telecoms infrastructure. By adopting the same market-based process of incentivizing investments, Thailand’s mobile broadband penetration should increase by 133% between now and 2020. Subsequent gains in cumulative GDP are expected to reach $23 billion.

Other countries in the region have unfortunately struggled to replicate that example. Bangladesh, though not an ASEAN member, is trying to implement a digitization program that mirrors Thailand’s objectives but is struggling to emulate its results. Bangladesh’s 4G auction, which came under fire for setting prices exceedingly high, was planned for last year but then halted by the Supreme Court. The auction now has the green light to proceed in February, with coverage possibly beginning in March of 2018.

The experiences of Bangladesh and the Philippines aptly demonstrate the importance of a rational, market-based approach to improving internet coverage. Incentivizing investments in broadband infrastructure will expand economic opportunity by letting ASEAN citizens plug into the global digital economy, but ASEAN’s leaders need to establish a comprehensive pan-regional plan to make this a reality.