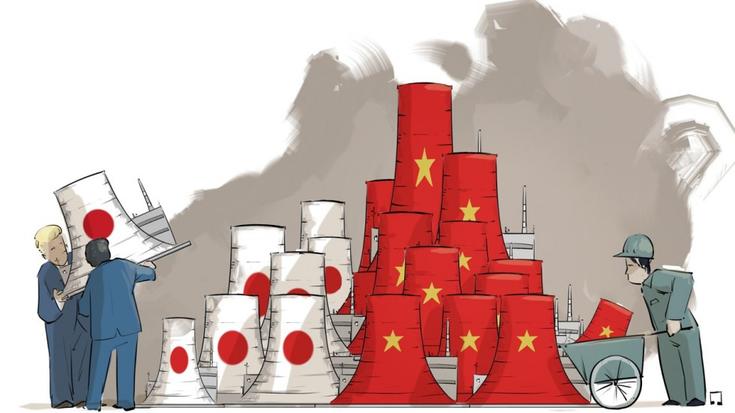 A joint report by Greenpeace, the Sierra Club and CoalSwarm revealed that Southeast Asia is the world’s epicentre for coal production, accounting for 85 percent of global new coal power development. China is the leader of the pack, and this is no coincidence. While tighter restrictions on domestic coal plants have been imposed by the central government to clear up pollution, Beijing has pushed the development of high efficiency, low emission (HELE) coal plants across Southeast Asia as part of the Belt and Road Initiative (BRI).

As China is expanding its influence in Asia and around the globe, Beijing’s foremost strategic competitor in Asia, Japan, is forced to step up efforts combating its shrinking influence in the region. And the booming energy sector of Southeast Asia, especially coal, is proving to be the new frontline in the geopolitical rivalry between Asia’s two industrial giants.

China’s coal drive is part of a larger and more muscular energy-driven investment policy that comes at the heels of its attempt to reduce carbon emissions. Born from a pressing need to put an end to the pollution choking its major cities, China has tightened restrictions on the domestic coal industry and has pledged to increase investments in renewables.

However, Chinese energy planners have realised they cannot relinquish coal as a major power source for the foreseeable future. The country remains highly dependent on coal, with the fossil fuel accounting for roughly 73 percent of China’s electricity production in 2014 according to World Bank numbers. Instead of abandoning coal, China is forcing the development of cleaner and higher efficiency coal plants – and, as a boon to its plan for greater regional influence, aims to export the technology abroad.

To that end, the China Development Bank (CDB) and China Export Import Bank (CHEXIM) last year lent $25.6 billion to global energy projects. This figure surpassed even the $22.6 billion provided by the International Bank for Reconstruction and Development (IBRD).

From a market perspective, Beijing’s plan to become the world’s primary HELE technology provider comes at the right time. Coal consumption across Asia is slated to outpace China’s over the next 20 years, coupled with an absolute increase in global coal demand over the next seven. The more than 1,600 coal plants scheduled to be built by Chinese corporations in over 62 countries will make China the primary provider of HELE technology in the world.

The politics of coal in Southeast Asia

Because policymakers still regard coal as more affordable than renewables, Southeast Asia’s industrialization has consumed, and continues to consume, large amounts of the stuff. To lift 630 million people out of poverty, advanced coal technologies are considered vital for the region’s continued development while allowing for a reduction in carbon emissions.

Clearly, the countries providing this technology will inevitably expand their sway with regional governments. As a consequence, an “arms race” between Tokyo and Beijing over the construction of coal plants is already underway.

China is currently in the lead, having overtaken Japan in 2000 as Asia’s leading exporter of coal industry equipment. It remains the largest technology supplier to India and the second-largest investor in coal projects in Vietnam, behind Japan. It is also constructing Bangladesh’s first clean coal plant.

These developments reflect Beijing’s key advantage in providing the necessary coal funding. China has been “greening” for years, developing renewables and carbon capture technologies at breakneck speed, while also investing more aggressively in the region than Japan at a time when most multinational banks have restricted coal funding. The results speak for themselves. Between January 2010 and March 2017, the Japan Bank for International Cooperation was involved in five financing deals. Not only did Beijing ink seven, but it also considerably outspent Tokyo.

But Japan is not exactly twiddling its thumbs either. Since the 2011 Fukushima disaster, Tokyo has ramped up coal use and has raced ahead in clean coal technology development. Japan now boasts the world’s most efficient coal-fired plant, which uses less coal to produce more electricity. Seizing on this competitive advantage, Shinzo Abe has tried to capitalize on these capabilities in a bid to grow Japan’s reach across Southeast Asia – and in China’s backyard. Through the Japan-led Asian Development Bank, Tokyo has pledged $6.1 billion for projects throughout the Mekong as well as for various other projects spanning Vietnam to Myanmar, providing an alternative to China’s regional designs.

What’s more, Japan will soon receive a significant boost from the Trump administration through the Japan-United States Strategic Energy Partnership (JUSEP). The partnership could be a game-changer in terms of Sino-Japanese energy competition, with a joint commitment by Tokyo and Washington to promote HELE deployment throughout South and Southeast Asia. With the Trans-Pacific Partnership in the doldrums, JUSEP is designed to counter Beijing’s energy diplomacy through a more cooperative and coherent bilateral push.

This may well be only the beginning. US Energy Secretary Rick Perry has repeatedly emphasized that coal will be a key part of the Trump administration’s policies. Washington is already working to launch an international alliance that is set to include a host of other countries committed to introducing clean fossil fuel technologies – including a number of ASEAN states.

Given that Southeast Asia will account for most of the world’s coal use in the coming decades, the geostrategic battle lines are already drawn. Both the US and Japan have a clear interest in limiting China’s rising dominance. Apart from the military dimension, soft power aspects like energy are emerging as the battlefields of the future. Through JUSEP and a possible clean coal alliance, Japan may finally have the support it needs to keep up with Beijing’s expansion.