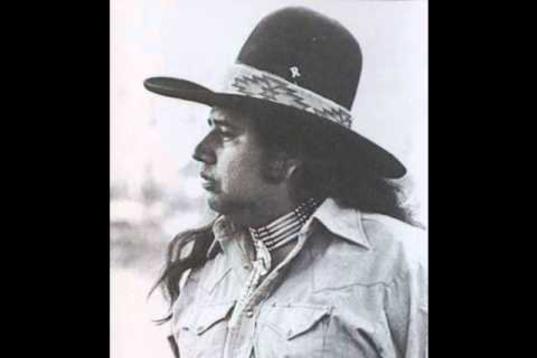 The Legend of Buddy Red Bow

I remember the moment I first heard Buddy Red Bow's music. I had driven over 1,200 miles over two days from Sacramento heading to Pine Ridge Reservation in South Dakota. While I drove past the town of White Clay, Nebraska, the image of baked skin shirtless drunks laying lifeless out on the street made for a surreal site. This was the border town next to Pine Ridge Indian reservation, White Clay was basically composed of a few shacks selling liquor to the Indians in the reservation where its sale was prohibited.

As I drove into the reservation, people were walking up the road to White Clay to buy alcohol. Their faces looked worn and void. Meanwhile, run-down buildings bore political slogans denouncing colonization, and the roads, which are maintained by the reservation, seemed to be of a grainier quality.

I was riding with Joe Kowalski, a friend who had taught for a stint at the reservation, and our radio was tuned to KILI, the local Pine Ridge station. As we made our way towards the site of Wounded Knee and further to our lodge, we were introduced to Buddy's twangy voice as "Reservation Cowboy" blasted through the speakers with a tune at home in any old Western cowboy song.

As I took in the rolling hills and the jarring experience of suddenly leaving the endless ranch lands of the Western United States into the world of an ancient culture that predated the Columbus, the lyrics of the song intrigued me and I was hooked.

"… AND THE BAD LANDS IS WHERE I MAKE MY HOME/
I RIDE UPON A SADDLE/
AND THIS HERE HORSE IS ALL I OWN/
I ONCE HAD ME A COWGIRL/
AND LORD SHE LOVED THE THINGS WE DID/
BUT SHE MET A CITY SLICKER/
AND I GUESS THAT'S ALL THAT SHOULD BE SAID."

Perhaps it was the humility of the words, and the experience of the Lakota Sioux wrapped up in the cultural art form of the American cowboy, but I had to learn more about Buddy Red Bow. What I found was a treasure trove of songs that featured a range of styles, soul-stirring melodies and social commentary rooted in the Lakota experience.

Buddy Red Bow was born Warfield Richards in 1948 on Pine Ridge Reservation, the home of the Lakota Sioux, a warrior tribe that had produced legendary chiefs like Crazy Horse and Sitting Bull. One of the few Indian tribes to ever fight the US cavalry to a standstill, the Lakota were driven by a fierce pride that refused to submit to colonial domination.

Adopted into the Red Bow family at a young age, Buddy would go on to live a life that in many ways deeply reflected the Native American experience. As a young man, Buddy served as a US Marine in Vietnam, a not uncommon path, as Native Americans have the highest percentage of military service out of any racial demographic. After returning from the war, Buddy tried his hand at music and acting, eventually getting involved with political activism.

Although he had some success as an actor with an appearance in the movie Pow Wow Highway where he appeared as a character based on his own life, his greatest impact was in music, where he recorded three albums. Using an Anglo cultural art form that had long been made their own by the Lakota, Buddy's first album had such a strong country flavor, that he would often be remembered as a country western singer.

Buddy Sang of the Lakota Experience

His songs ranged from wistful romantic cowboy tunes like "Reservation Cowboy," where he sings of love lost in a spirit of good humor, to the deep melancholy of classics like "Indian Love Song," where he seemed to capture the soul of the plains. Lyrics in the song speak of the parting of lovers, almost echoing the great distances that characterized the vastness of a land where a simple task like buying groceries could easily be a 60-mile drive.

Other songs such as "My Once Indian Girl" served as social commentary. Describing a Native girl forced into a life of prostitution to survive, Buddy bemoaned her once unspoiled purity before she started to walk the streets. Reflecting the harsh realities of a people uprooted from their traditional way of life, and forced into a marginalized existence where they struggled to adapt to a new reality, the song seemed to correlate the loss of the Native girl's innocence with the loss of the Lakota traditions themselves.

In "Black Hills Dreamer," Buddy sings of the deep-seated wish of the Lakota Sioux to see the return of the Black Hills, which they consider sacred land. The Black Hills were guaranteed to be theirs in perpetuity by the Treaty of Fort Laramie, but their rights were swept aside by Custer's troops when gold was discovered in the hills. During my time there, I came to understand why the return of the Black Hills, where Mt. Rushmore is located, continued to lay at the core of the Lakota soul. Contrasted with the gentle but somewhat mundane rolling hills of Pine Ridge, the Black Hills were a veritable paradise of majestic mountains thickly forested with pine trees and lush with pristine rivers and lakes.

Buddy Red Bow died at the age of 44 from cirrhosis of the liver, likely caused by alcohol abuse. The cause of his death reflected the realities of substance abuse that continues to plague reservation life, which, along with other social problems, contribute to an average life expectancy of only 48 for males and 52 for females.

To be sure, social problems are real in Pine Ridge, where high school graduation rates hover at 67 percent, and 97 percent of the population lives below the federal poverty level. The majority of the population remain dependent on government largesse, the median income is roughly $3,500 a year and substance abuse is rampant. This difficult reality is the result of the deep marginalization of a people who, despite courageous resistance, became victims of a cultural decimation that left them corralled in enclosed land to make way for European settlement of the West.

However, despite all of these difficulties, the Lakota today are making great strides in rebuilding their identity with Lakota language being taught again at the Oglala Lakota College, Sitting Bull College and the University of South Dakota. Increasing numbers of Native students are seeking higher education and brighter futures. In addition, what struck me most deeply about Pine Ridge was the strong sense of community that existed, as well as the genuine sincerity and quiet pride in many of the people I met.

Perhaps that is why Buddy Red Bow's music continues to resonate so deeply -- because his songs captured the humor, pain and soul of the Lakota people. After his death, Buddy Red Bow was one of the first group of artists to be inducted into the Native American Music Awards Hall of Fame, and since then, largely considered to be a legend. Over two decades since his passing, perhaps it is time that the rest of the US learn about this soul singer whose music echoed the spirit of the Great Plains.