In the Hollywood blockbuster Black Panther, a fictional African nation known as Wakanda commands the heights of technological advancement while still retaining an ancient and rich culture. This revolutionary depiction of a culturally powerful and scientifically advanced African kingdom resonates throughout the popular imagination, which helped lead the film to its record-shattering US$1.2 billion earnings.This imagery evoked a passionate discussion in the world of social media about the state of black empowerment in both Africa and the African diaspora.

In recent years, modern Africa has been experiencing an unprecedented period of sustained economic growth that some have argued amounts to an African renaissance. Ethiopia, a nation with a proud and unique heritage, has effectively deployed a strategy of comprehensive industrialization that has seen it build the foundation of a large manufacturing industry and the beginnings of a modern urbanity. So, will Ethiopia be the Wakanda of the future?

Between 2004 to 2014, Ethiopia experienced per capita growth of 8% per year and a manufacturing sector that sped ahead at 11%. Unlike many African nations that have primarily counted on exporting commodities and abundant natural resources to fuel their growth, Ethiopia is resource-poor and landlocked. However, by closely following the Chinese model of state-led economic growth, the Ethiopian government has been able to engineer the foundation of a nascent industrialization that has seen it become the manufacturing hub of Africa.

This orientation began under the late prime minister Meles Zenawi, who ruled the country from 1995 to 2012 and expressed great admiration for the development models of East Asian nations. By combining state-led investment in good infrastructure and industrial zones with policies that were friendly to investors, Ethiopia began to emerge from the shadows of war and famine into a period of rapid economic growth.

Since then the nation’s policymaking has been devoted to building up light industries such as apparel manufacturing, construction, and agricultural processing as a stepping stone to growth, as many East Asian nations have done. In one massive industrial park, Hawassa, 18 companies from more than 11 countries operate factories in an area of more than 140 hectares  equipped with its own water-treatment plant and textile mill. The park is expected to create more than 60,000 jobs once it reaches full capacity.

The government has also been committed to building physical infrastructure, as its road network expended to 53,997 kilometers in 2011 from 26,550km in 1997. With the completion of the Grand Ethiopian Renaissance Dam on the Nile, the country should expect to quadruple its power-generation capacity. The capital city Addis Ababa now boasts a growing skyline and is connected with a modern light rail system built with Chinese aid.

In lockstep with these efforts, the government has invested heavily in education, with impressive results. Enrollment in primary education had risen to more than 94% in 2012 from below 20% in the 1990s. The number of universities now numbers over 30, from just one in 1990.

However, Ethiopia is already displaying ambitions to become more than just a low-cost manufacturer. The focus on developing light industries is meant to establish an industrial foundation to build upon. Already, Ethiopia is looking toward moving up the development ladder to expand into more sophisticated and high-tech industrial manufacturing.

The Metals and Engineering Corporation (METEC), a large state-owned conglomerate, has already established factories producing automobile engines and light vehicles to serve the growing demands of a modernizing country. In the country’s Vision 2025, Ethiopia has expressed ambitions of becoming a player in the aerospace industries. Already, Ethiopian airlines have formed a joint-venture aerospace company with South Africa’s Aerosud that will manufacture and supply aircraft parts to Boeing, Airbus and other aerospace players.

Ethiopia is gearing for future growth as its close relationship with China begins to bear fruit. As a major linchpin on China’s Belt and Road Initiative and a major recipient of Chinese investment, Ethiopia’s foreign direct investment reached $4.2 billion in the 2016-17 fiscal year.

As China’s gargantuan manufacturing industry shifts toward high-technology products, a potential windfall of 85 million jobs may be shifted toward Africa. With a burgeoning population of more than 100 million and heavy investments in building public and industrial infrastructure, Ethiopia is well placed to receive many of these jobs.

Very soon, Made in China may slowly give way to Made in Ethiopia.

A rich and proud history

Ethiopia is a proud nation with an ancient history and a deep cultural identity. Unlike many of the modern African states that were formed primarily based on colonial borders drawn up by rival European powers, Ethiopia’s existence came organically, and despite a few years of Italian occupation, has largely not been colonized.

The country’s history reaches into the dawn of humanity, as the region is commonly recognized as the cradle of human evolution. It stands with Armenia among the earliest Christian nations, and undoubtedly the Ethiopian Orthodox Church boasts some of the most ancient and richest traditions on Earth, with the Ark of the Covenant supposedly enshrined in the holy city of Axum, and the vast remote hinterlands are dotted with historic monasteries.

In the old imperial city of Gonder, known as the African Camelot, the landscape is marked by majestic castles that recall an era of past glories. In the holy city of Lalibela, impossibly constructed rock-hewn churches are accessed through intricate tunnels that have stood the test of time. Ethiopians communicate with their own written language, the Ge’ez script, which is utilized to write Amharic, Tigrinya and other languages native to the region.

In determining the fate of nations, culture and history matter. They matter greatly. Powerful societies are built upon strong cultural foundations. Nations with proud histories tend to set higher bars for themselves because of their determination to live up to past glories and their self-confidence. In the parameters of cultural wealth, historical pride and a unique identity, Ethiopia stands tall.

The challenges of instability

Despite Ethiopia’s significant achievements and successes in laying a foundation for industrialization, it continues to face immense challenges to continuing this upward trajectory. Most notably, issues of ethnic and social divides have recently surged, leading to massive unrest that has threatened the government’s authority and political stability.

A primary issue of contention is the disproportionate power held by the country’s Tigrayan minority, who only account for 6% of the total population. Allegations of corruption and land grabbing tied to making room for development fuel anger from other groups, most notably the Oromo people, who form one-third of the population and constitute the largest single ethnic group.

Two years of anti-government protests led to a state of emergency after the sudden resignation on February 15 of the country’s prime minister, Hailemariam Desalegn. The unrest began with protests against land grabs and then broadened to calls for greater political representation, which triggered a massive government crackdown that led to scores of deaths and more than 1,100 detained.

However, with the recent appointment of Abiye Ahmed, an Oromo, as prime minister, hopes of healing the ethnic and social divides that have threatened the country’s stability have risen. Ahmed, a technocrat with a reputation as a reformist and from a mixed Christian and Muslim background, is cause for cautious optimism for a country desperately balancing tomorrow’s ambitions with today’s divisions. There is hope that he will be better equipped to handle and resolve social-justice issues that have caused massive anger, while continuing to advance the economic development of Ethiopia.

Africa, a continent of immense geographical size and vast resources, undergoing massive population growth and rapid urbanization, is poised to play a greater role in the century to come. Among its scores of nations, several have begun to show great promise in becoming the banner holders of Africa’s advancement.

Ethiopia, with its commitment toward following the mold of industrialization that has proved so successful in East Asia, combined with a fierce pride in its ancient culture, stands at the forefront of a new and modern Africa.

Although the country continues to be plagued by issues of social unrest and poverty, it has also demonstrated a disciplined adherence to clear national goals and plans set forth by its ruling coalition, which has already built an impressive foundation of industry that can be used as a rung for moving up the development ladder.

If Ethiopia continues in its program of large-scale urbanization and the expansion of its manufacturing capabilities into fields of high technology and innovation, it could become a genuine embodiment of Black Panther’s Wakanda and serve as a shining beacon for the rest of the African continent. 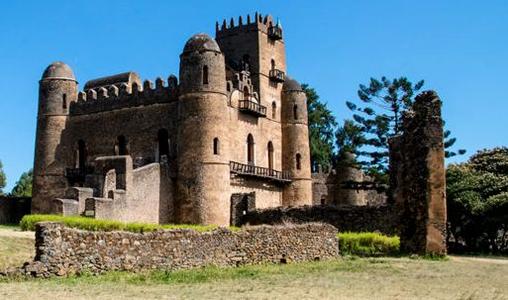