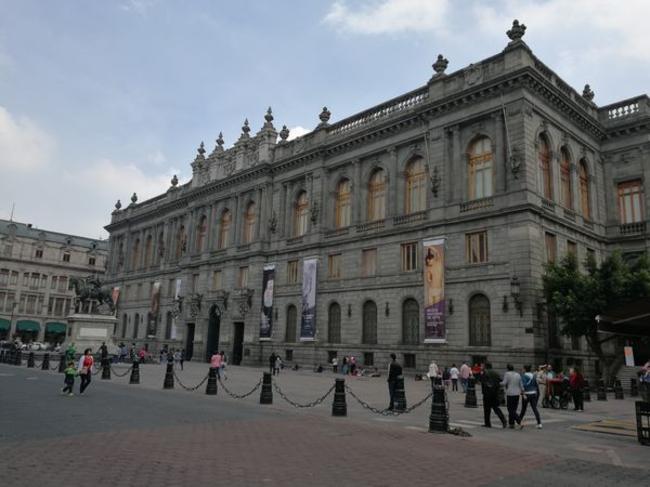 THE FORGING OF MEXICO CITY: The Ancient Capital of the Americas

The air in the soaring Metropolitan Cathedral is heavy and dank, a haze floats through the air as gilded altars are overshadowed by soaring stone pillars. The atmosphere is so thick you feel your body moving through a medium, there is resistance. The heaviness of the environment reminds me of the Church of the Holy Sepulcher in Jerusalem, it is a feeling that without explanation, causes you to realize that this was a place where remarkable experiences of humankind had transpired. The stones look ancient and feel like they would have endless stories to tell. The immense tabernacle with its glorious Baroque façade guilded with gold would look at home in a renown cathedral in Europe, were it not for the Amerindian features of the pilgrims around me. Their veneration and the awe they have in the presence of this place deepened the solemnity of the moment.

The Cathedral sits bestrode on the northern face of the Zocalo, the beating heart of Mexico. Surrounding the great plaza are grandiose buildings and monuments whose details and aged surfaces betray an authenticity only found in great Old World European capitals.

Mexico City is in fact the oldest living city in the Americas. However, unlike the other great cities like New York or Buenos Aires, the origins of its glories do not rest on foundations laid by European settlers but on a far deeper legacy as a great Aztec capital. Before there was a Ciudad de Mexico, there was a Tenochtitlan, and before there was a Nueva Espana, there was the Aztec Empire. The ancient Amerindian metropolis that once stood here was among the most glorious cities of its age, complete with the presence of canals, planned roads, temples, palaces, gardens and great marketplaces with all of the hallmarks of a now extinct civilization.

Undoubtedly, few other cities in the world have served as the site of a great capital city belonging to two completely different civilizations, let experiencing such an extreme measure of trauma, glory and rebirth altogether. Nothing illustrates this history more than the fabled stones of which the Metropolitan Cathedral was built, the same stones taken from the ruins of the great Templo Mayor dedicated to the Aztec God Huitzilopchtli.

One can only imagine the trauma of a newly conquered people who were forced to destroy their own beloved temples to their Gods and then use those ruins to construct new cathedrals devoted to the foreign God of the conquerors, to which they were then forced to worship.

To enforce their rule, the Spanish employed the brutal methods developed during the Inquisition. Through mind control, physical brutality, disease, rape and ensuing miscegenation, the Mesoamerican identities gave way to the new Hispanic world. On the site of their former capital, Tenochtitlan, the new capital of Nueva Espana slowly emerged as a grandiose Iberian city. On the same stones that once witnessed human sacrifices to the great Aztec Sun God, now housed the golden cross that hung a European looking man that represented the Son of God.

The new city they built was without equal in the Americas for its time. When Cortes encountered Moctezuma, the Aztec Empire had a population of six million souls, and Tenochtitlan was a city of 300,000 people making it one of the greatest cities in the world. Undoubtedly, this was a civilization with an immense reservoir of human ingenuity by way of I sophisticated engineering skills and high levels of artisanship. When the Spanish conquered the most populous and advanced empire of the Americas, they effectively had at their disposal an endless reservoir of resources to build a magnificent presence in the New World. The evidence of this great wealth is everywhere. Mexico City is a treasure trove of great palaces and mansions, a massive array of ornate European classical architecture from the near medieval to late 19th century Parisian magnificence, a great heritage that is unmatched in other cities of the Americas.

Modern Mexican culture itself is a product of the fusion between the Spanish and the Indian. Everywhere one goes in Mexico City the Spanish layering over the Amerindian is obvious, from the Cathedrals built over temples, to steaks served along with beans to the devout religiosity of the Aztecs refashioned into Catholic devotion, to the varying mixtures of Iberia and Mesoamerica in the faces of the locals. The food scene of this metropolis bursts with the richness found in the deep culinary heritage of the region, along with an unending array of influences brought by later newcomers.

Despite, or perhaps, because of this unique and troubled history, the locals display a burning pride of their city and of the richness of their double heritage. The many seeming contradictions of this city is evident in both the vitality it exudes, coupled with a certain sense of stagnation. Deeply imbedded traditions sit alongside energetic contemporary counter cultures. A feeling of light heartedness that is expressed by the friendly and easygoing nature of the locals masks a deep and authentic melancholy that is only present in cities that have experienced the polarizing extremes of the human condition, from immense trauma to unrivaled glories. Like the great arch of history, the city trudges on, both burdened and crafted from its exemplary history, continuing as the site of a great soul, anchored by anguish, nostalgia and a passionate zeal for life.