Handlebar mustaches, artisanal coffee, basket equipped bikes and a plethora of farm to table dining choices available. Did I just step into Portland? Nope. This is the scene in Midtown Sacramento.

Long derided by many Bay Area residents as a stop along the way to Tahoe. Sacramento has come of age. With decades’ long investment into refurbishing and redevelopment of its urban core reversing prior missteps of over-suburbanization, Sacramento is reinventing itself from a once staid government town to the next great city where the young and old alike can live out a lifestyle of vibrant and intelligent urbanity.

By reinvesting into its historical central city, focusing on infill projects and a brand new NBA arena taking center stage downtown, Sacramento’s coolness factor is now something to be reckoned with.

Sacramento has long lived under the shadow of its much more glamorous sister down the way. From the years I’ve spent in Sacramento, it’s underrated reputation is as much a fault of the locals as it is of outsiders who don’t know much about the city. Being an enthusiastic student of the city’s history, nothing was more grating than hearing native Sacramentans meekly touting their city for its convenient location equidistant between the Bay Area and Tahoe, as if the only thing of value in Sacramento was the ease of getting out.

A cursory look at Sacramento’s history makes it clear that this is a city which can hold its own. Formerly founded in 1850, Sacramento stands along with San Francisco as the two major early cities of California prior to the 20th century. In fact, older Chinese immigrants still refer to Sacramento according to its original Chinese name “Yifow” which means “second port”, as it was the second port original immigrants would arrive to after landing in San Francisco.

“I have been in most of the saloons, and there are a good many of them. You can shut your eyes and march into the first door you come to and call for a drink, and the chances are that you will get it.”

From its emergence in the Gold Rush days, Sacramento was never a village or a town. It started its life as a cosmopolitan city, with its streets full of East Coast migrants, Mexicans, native Miwoks, Chinese and European immigrants. It was a city where fortune seekers from all walks of life came to chase their dreams. From gold miners, to railroad workers to small businessmen seeking to capitalize on the frenzy.

The pioneer city they arrived in, sat on the confluence of two mighty rivers, the American and the Sacramento. Seeming to command a great valley with magnificent Sierras to the East and the infinitely carved delta to the West, the city these salt of the earth men and women settled in and built, appeared to hold limitless opportunities as far as the vast horizon can see.

As the early years past, and the city proved its resilience by building higher to survive countless floods, Sacramento saw itself become established as the new state capitol. Simply touring Sacramento’s central city today, it is obvious what prominence Sacramento enjoyed during this period by the existence of the second largest Victorian housing stock in California, trailing only San Francisco.

In the mid to late 19th century, Sacramento played a crucial role in America’s westward expansion as the western terminus of the transcontinental railroad, or as the original destination of all goods imported hailing from Northern California bound for the East. The evidence of this can be seen in the old paddle steamers sitting in Old Sacramento, the only ones found west of Mississippi.

Sacramento during the gilded age was a city where many of California’s most eminent industrialists were made. Most notable among these were the “Big Four” of the Central Pacific Railroad, Mark Hopkins Jr, Charles Crocker, Collis P. Huntington and Leland Stanford. Their legacy includes several distinctive and architecturally artistic mansions which dot the grid. However, unfortunately for Sacramento, many of these tycoons invested the bulk of their wealth elsewhere, mostly in areas of California with cooler summers and more temperate winters.

THE DEPOPULATION OF SACRAMENTO’S URBAN CORE

The post-war era witnessed a series of policy choices governing the redevelopment of downtown Sacramento which brought about catastrophic results to the vibrancy of Sacramento’s urban core. In 1950, Sacramento’s downtown had a population of 58,000, which represented half of the city’s total population and nearly a quarter of the county’s entire population.

However, big changes were underway as the city government focused on suburban expansion as the crux of future development. Government policies such as redlining steered homeowners away from downtown areas that were considered dilapidated and run down, even if many of these neighborhoods were still vibrant with working class life. The vision that these city planners aspired to was the car centric urban model dominated by massive suburban development linked by an expansive network of freeways.

Entire historic neighborhoods in the downtown area were torn down to make way for large government buildings which hosted a daytime working population who fled the central city after sundown to return to their cozy homes in the suburbs. On the evenings and the weekends, Sacramento’s central city was left a virtual ghost town with little commercial vibrancy. From 1950 to 1970, Sacramento’s downtown population dropped from 58,000 people to roughly 27,000. In contrast, Sacramento city’s population exploded to 257,000 with the county’s population ballooning to 631,000, thus effectively marginalizing the population of Sacramento’s urban core. Around the historic center, a new Sacramento made of tract homes, strip malls and freeways came to dominate life in the city.

REVIVAL OF THE URBAN CORE

Starting in the 70s, the tide began to turn as young artists, counter culture types, students, gay and lesbians, and government workers who simply wanted a shorter commute started to take over dilapidated homes in the Midtown and Downtown areas, renovating and inhabiting them and reviving life in the central core. Spurred by the demolition of the historic Alhambra Theater, a local movement advocating historical preservation began to make ground. Government involvement also started to work for the benefit of urban vibrancy including the establishment of CADA, which slowed the demolition of historic buildings and focused on reintroducing vibrancy into key corridors, and the arresting of redlining practices which had contributed to the targeted deterioration of key neighborhoods.

The last decade has seen urban vibrancy come to critical mass in neighborhoods such as Midtown, adjacent to downtown. The atmosphere is characterized by beautifully restored 19th century Victorian and Craftsman homes, a diversity of innovative food establishments leading the trend in farm to table fare, and a healthy plethora of thrift shops, high end boutiques and bars jostling side by side with galleries, community centers and newly converted live/work lofts. This scene has reinvigorated Sacramento’s urban care with a distinct urban culture that can be defined with a certain unforced quirkiness along with an unpretentious sophistication.

With the planned construction of the downtown arena, a revival of the long stalled railyards project and increased development of the West Sacramento riverfront, Sacramento is finally coming unto its own. Under the leadership of Mayor Kevin Johnson, the city of Sacramento has concentrated its focus into the central city’s revitalization.

Over the past decade, over $1 billion dollars of investment have been sunk into Sacramento’s downtown. Mayor Johnson has set a goal of 10,000 new housing units to be built downtown over the next ten years and it seems that goal will be reached with 781 units built or with construction initiated just this year, and an additional 13,000 in the planning stages.

Everywhere you look, projects are emerging which will shape the future of Sacramento’s downtown. From the development of mixed use housing on K Street, the planned construction of a Kaiser hospital in the long abandoned Railyards, the revitalization of R street as a major artistic and entertainment corridor to The Bridge District transforming West Sacramento’s riverfront, Sacramento’s urban revival is well on its way.

Long lying in the shadow of California’s more glamorous cities, the current era of development is a ripe opportunity for Sacramento to integrate the redevelopment of its urban core with the redefinition of a confident and uniquely Sacramentan civic identity based on its rich past, its increasingly vibrant present and a clear vision of the future.

Sacramento’s central city, packed with historic sites, architecture, a walkable layout, and a density of classic theaters, performance venues, restaurants and bars, is fast becoming the second entertainment destination of Northern California behind San Francisco. By establishing an attractive urban atmosphere, Sacramento will increasingly become a favored destination for cutting edge and creative businesses, and the deep talent pool they will bring with them, many of whom may see the obvious advantage of operating in an up and coming Northern Californian city with a lower cost base.

Sacramento’s metropolitan region of nearly 2.5 million and growing ranks it as one of the top 25 largest metro areas of the United States. With a strong housing market which clocked in a solid 10% appreciation last year and an expected 6% for 2016, Sacramento’s housing market has recovered since the darkness of the housing crash roughly seven years ago. However, with the local economy still dependent on government and construction, a revitalized and distinct central city can work to help the region diversify its economy and fuel growth in other industries such as technology and tourism.

Sacramento needs not compare itself with San Francisco. The fact is, both cities will continually be different and have their own spheres. But Sacramento’s reinvention should start with the assertion of a unique and alternative Northern Californian spirit. A place where a grounded sensibility and creativity can co-exist, a place where history is deep rooted but possessing a culture embracing a smart and sustainable urbanism, a pioneer city with a vibrant urban core and the wild outdoors as its backyard.

As the gilded Victorians which line the leafy streets of the “City of Trees” can attest, greatness once thrived in the city of Sacramento, and an array of urban redevelopment projects are building the stage where past glories are now returning to California’s capital city. 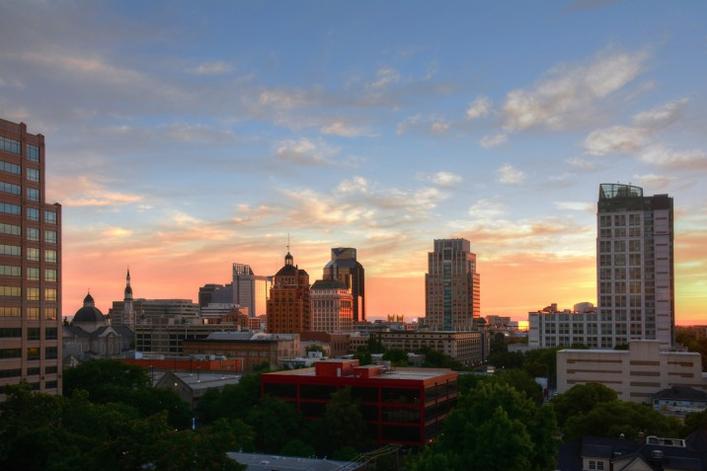