As the legend goes, when Deng Xiaoping opened China’s doors to the outside world, Shenzhen was nothing more than a fishing village. Now it is a metropolis of 12 million people capped by some of the tallest skyscrapers in the world. From the beginning of China’s market reforms, Shenzhen has played a leading role in defining the country’s direction. Starting out leveraging its ever growing masses of cheap labor, the city and the region became a major manufacturing and OEM hub, as well as a cheap shopping destination for the neighboring city of Hong Kong. For a long time, Shenzhen’s local businesses were notorious for Shanzhai, or copycat products, as they strived to emulate the most desired brands and products of the West and Japan.

However, in the past five years, the city’s industries have begun to shift their focus from mere emulation to actual innovation. Shenzhen has attracted some of the brightest engineers in the country and its businesses have grown in size and sophistication, these factors combined with China’s massive chest of capital have seen the city become a global hub for hardware innovation. Below are some of the fields where the city is breaking new ground, and how these innovations may begin taking on a global footprint.

Polluted air and grey skies have been a regular feature of large Chinese cities ever since the beginning of rapid industrialization in the 90s. In response to this, the government has begun to transition the country towards renewable energy, setting on investing $360 billion in the field by 2020 and making China the biggest clean energy player. A major feature of this move is the field of electric vehicles. China has mandated an ambitious scale of policies promoting EVs including mandating automakers replace at least 10% of their production lineup with EVs by 2019, to providing generous subsidies for EV purchases as high as $15,000 a car, and a massive plan to build a national network of charging stations of which 171,000 are already in existence.

The city of Shenzhen is home to BYD, China’s equivalent of Tesla. Although BYD’s offerings have traditionally not been anywhere near as glamorous, the company is vertically integrated since it started out as a battery maker and makes a wide lineup of vehicles from passenger cars to commercial trucks and buses. Selling over 100,000 EV vehicles in 2017, BYD is already the world’s largest electric vehicle company. Everywhere in the city of Shenzhen, the company’s taxis and buses dominate the roads. The city, which already has 14,000 electric buses on the road, 80% of which are supplied by BYD, has determined the city’s bus fleet will be all electric by the end of this year. Not satisfied by being a player in China, the company is expanding its global profile. Expanding its bus plant in Lancaster, CA and building a truck plant in Canada, BYD, which is 10% owned by Warren Buffet and has already enlisted Leonardo DiCaprio as a brand ambassador, is intent on becoming a global brand.

A stroll around Shenzhen’s fashionable retail and entertainment district of OCT harbor inevitably brings you to a futuristic building that looks like it was planted on the grounds from the page of a sci fi novel. The building serves as the flagship store of DJI, the world’s largest drone maker, which is based in the city of Shenzhen. Founded in 2006 by Frank Wang and taking advantage of the region’s strength as a OEM manufacturing hub, DJI debuted its Phantom quadcopter back in 2013 and essentially created the modern consumer drone industry. Today, it dominates 85% of the world’s market and with new high tech models such as the Mavic Pro, is continuing to cement its grip.

In the golden $500 to $1000 priced segment, DJI continues to lead the way with a 36% market share, with the second place going to 3D robotics, led by former Wired editor Chris Anderson and stocked with a formidable VC war chest. However, following 3D’s recent announcement that they were changing their focus from drones because they could not keep up with the vertically integrated Chinese powerhouse, DJI’s dominance over a crowded field of well funded American and European rivals continues to be unchallenged.

In other ways, DJI has expanded into unconventional arenas that blend emerging robotics with the field of big entertainment such as its sponsoring of RoboMaster, an annual contest between aspiring engineers from all over the world to design competing robots who take on a field of diverse physical challenges to determine their competence. In 2017, the competition attracted over 7,000 participants from over 200 universities across the world and racked up more than 814,000 online views on twitch.tv. Through these competitions and maintaining a cutting edge in drone and robotics innovation, DJI has emerged as a leading pioneer in Shenzhen’s transition towards becoming a global tech hub.

The Pearl River Delta, where Shenzhen is based, developed into the world’s factory where the ubiquitous “Made in China” label became a fixture for global consumers. From cheap toys to gradually more sophisticated OEM manufacturing for global giants such as Apple, the region gradually built the world’s most extensive hub of manufacturing and industry. Local businesses that once copied the products of foreign makes have now emerged as sophisticated brands in their own right. Nowhere is this more apparent than in the smartphone industry, where Chinese smartphone brands have come dominant in many markets throughout the world. The region is home to three of China’s four largest smartphone makers, including Huawei, Oppo and Vivo, all of which have built a reputation of cutting edge technology and sleek design. In just a few years, these three brands have grown from being marginal players to rank only behind Samsung and Apple in global market share, with Huawei expected to soon surpass Apple to become the world’s second largest smartphone manufacturer according to new reports from market research firm IDC.

Shenzhen is also home to Tencent, the giant tech company that ranks along with Facebook and Apple in the world’s $500 billion tech club. The company is a dominant player in games development, and owner of wechat, a social media messaging app that now boasts over 900 million daily users. Through wechat’s payment service, coupled with Alipay, a similar service by Alibaba, the volume of Chinese mobile payments zoomed past $5 trillion by the end of 2016 with volume expected to surge past $45 trillion by 2021. Through the use of QR codes and the ubiquity of smartphone usage, businesses from street vendors to large big box retail are riding the wave of China’s transition into a cashless future.

The Innovation Hub of the East

Shenzhen continues to act as the dragon’s head for China’s ongoing modernization and industrialization, a feat of a size and scale never before seen in world history. With a VC market now rivaling that of the US in size, a government firm on making the country a leader in innovation, and a massive and growing middle class, China’s presence in the global innovation industry can no longer be ignored. Shenzhen in the heart of the Pearl River Delta, the world’s largest megacity region, enjoys a unique intersection of industry, capital, human resources and market circumstances to maintain its lead in China’s newest transformation into an innovation led economy. The heart of the city’s tech scene, Nanshan district, is home to 125 listed firms boasting over $400 billion in market value.

With its massive pool of companies specializing in all fields of tech from AI to EVs to smartphones to drones to genomics and much more, Shenzhen is poised again to act as a disruptive force in the world economy since the region first became the factory of the world, but this time, it will be a race to heights of technological prowess. 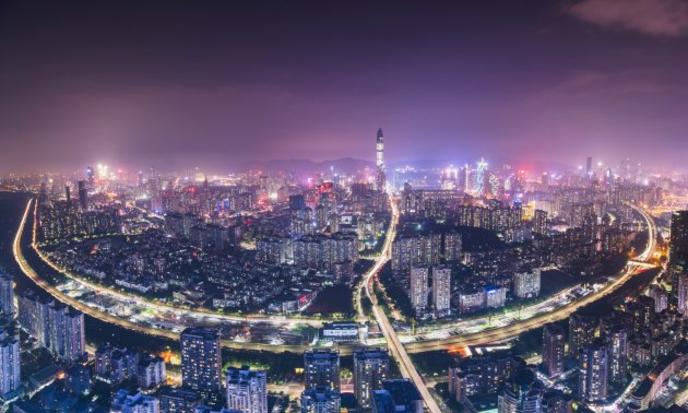