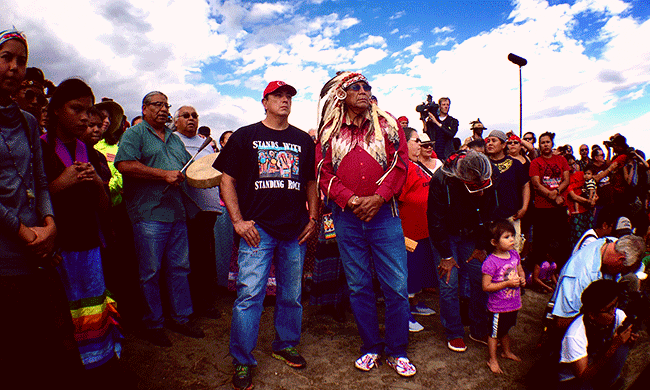 Across the vast plains of the Dakotas, a battle is reaching new heights against the intrusion of a pipeline, and for a renewed stand defending the rights and livelihoods of Native Americans. As Energy Transfer Crude Oil, the Dallas based corporation building the pipeline, continues with its construction, tensions are erupting into an extraordinary conflict with Native Americans forming barriers with their own bodies and chaining themselves to behemoth industrial machines in a desperate effort to stop the digging. According to Krystal Two Bulls of the Red Warrior Camp, an organization opposing the pipeline on the ground, this battle represents just the latest example of a long historical legacy of marginalizing the rights and cultures of Native Americans.

The Dakota Access pipeline is a 1,170 mile pipeline that is designed to carry 570,000 barrels of crude oil from the Bakken oil fields of Northwestern North Dakota into Illinois. Originally planned for a more northern route which was ultimately rejected due to concerns about the dangers it posed to the drinking supply of Bismarck, ND, a more southern route which crossed through the water supply and land adjacent to the Standing Rock reservation was opted for and approved by the state of North Dakota. Energy Transfer claims to have secured all the federal and state rights required to begin this $3.7 billion valued project.

NATIVE GROUPS OPPOSED DUE TO PUBLIC SAFETY AND CULTURAL REASONS

Since the pipeline route was redirected away from the Bismarck water supply and now directly cuts into the Missouri river watershed, the primary source of clean water for the Standing Rock Sioux and other local tribes, Native opposition was provoked due to concerns over potential oil leakage and environmental contamination.

The pipeline, which was granted an easement by the Army Corps of Engineers, will not cut into reservation land, but into adjacent territory that was historically granted to the tribe by the Fort Laramie treaty of 1851 but later seized in the late 19th century by the US government in violation of its promises. According to Two Bulls, the project will be built on territory considered as part of ancestral Sioux lands and in addition to providing their primary source of clean drinking water, also contain innumerable cultural and historic sites. By approving this project without proper consultation with the tribe, the Army Corps of Engineers and the state of North Dakota are violating the Clean Water Act and the National Historic Preservation Act.

More significantly, Native tribes claim that the project is a clear and symbolic example of the grave injustices that have long muffled their voices and disregarded their existence.

The past few days have witnessed incidents of violence and mayhem that serve as chilling reminders of the inhumanity that the powerful is willing to resort to when opposed by human beings who are regarded as mere nuisances and obstacles.

On Saturday, hired mercenaries armed with violent attack dogs and pepper spray, descended upon the protesters. Based on accounts on the ground, at least six people and one horse were seriously bitten, including a pregnant woman. The dogs were reported to be so vicious and out of control, that they had even begun to attack their own handlers on occasion. The mercenaries are believed, though not confirmed to be, employed by G4S Security while the dogs are believed to be sourced from Frost Kennels in Ohio.

Subsequently, further provocations added insult to the physical injuries suffered. According to Two Bulls, on Friday, the Standing Rock Reservation filed a cease and desist order against further construction and released the locations of various ancestral burial grounds marked by burial rock piles known as cairns, indicated by tribe historian, Tim Mentz. The following day, construction crews raced miles ahead to deliberately unearth these sites, removing topsoil 150 feet wide and nearly 2 miles long. In an attempt to stop this desecration of their ancestral sites, conflicts erupted which led to two guards being injured.

The Sioux tribe is currently awaiting a verdict on an injunction to halt additional construction on the pipeline. US district court Judge James Boasberg is set to rule on the case September 9th, which provides special impetus for the opposition to spread awareness of their plight. However, according to Two Bulls, hopes are not high that a resolution will be found soon, as an injunction in their favor may not necessarily indicate a conclusive end to the project. In addition, the history of collusion between the US government and private interests seeking profit, running roughshod over the rights and dignity of the Native Americans, provide little encouragement to tribal activists.

However, armed with the power of social media, a rising tide of Native American opposition united from diverse tribes, is rapidly emerging in numbers and volume. What started as a protest involving dozens, now have reached numbers over four thousand. The sentiment at hand is rooted far deeper than simply halting the construction of this one pipeline, but taps into a fervent rejection by Native activists of their historical disenfranchisement. According to Two Bulls, the Sioux nation, bearing the proud legacy of warriors such as Crazy Horse and Sitting Bull, will continue to struggle for their rights and fully expect that the road will be long and hard fought. However, the plan is to prevail.