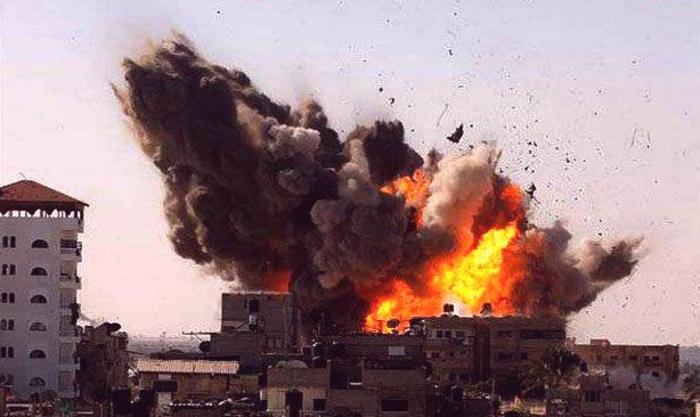 No to a Syria War

Why military escalation in Syria is not in the American interest

The images flooding our news sources are the stuff of nightmares. Children gasping for air, their chests heaving in pain, strange foam issuing from their mouths. This time, the images are coming out of Douma, one of the last strongholds of the opposition rebels resisting Assad regime’s reconquest of Syrian territory.

Already, as if singing in chorus, shrill cries are flooding throughout all of the mainstream news outlets and self righteous rhetoric employed in lengthy articles, all calling in unison for a new war in Syria with the goal of regime change for Assad. On Monday, a few days after announcing that we would be pulling our troops out of the Syrian theater, Trump castigated the Assad regime and its Russian and Iranian allies and promised a swift and powerful military response to this attack. All this, as the offices of his attorney, Michael Cohen, were raided by the FBI. Meanwhile Israeli jets pounded the T4 airbase used by Syrian and Russian forces as war cries are being echoed by France and the United Kingdom.

It is precisely during times like this when the fog of emotion is being deployed so hysterically by powerful political and media forces to build public consent, that it is absolutely critical to step back and analyze the narrative being thrusted upon us and what our interests are in fighting another war in the Middle East.

What is clear is that the sequence of these events nearly mirror the circumstances of previous attacks attributed to Assad back in 2017 in Khan Shaykhun and in 2013 in Gouta. During each incident, Assad was immediately castigated as the guilty party before any facts were proven and indeed, against all logical motives on his part, while a loud chorus called for a massive and immediate military intervention to remove his regime from power. However, despite the enormous pressure applied on the White House for a hawkish response, both Obama and Trump respectively resisted deepening American involvement in a conflict. Their actions were vindicated months later in each instance by the results of UN inspection teams who, in both instances, determined that there did not exist any evidence that Assad had deployed chemical weapons thus supporting allegations that these attacks were false flag operations planted by the rebel forces in order to elicit Western military support.

Assad’s regime and his Russian allies have made significant ground in the last few years in winning the long running civil war. In Douma, the opposition is surrounded and desperately putting in a last act of resistance before the Syrian government’s impending victory. A chemical attack by Assad at this point, which would only open the door for Western military punishment, would be political suicide and defeat all logical motives. The voices calling for war completely ignore this simple logic and instead insist on further demonizing Assad. However, even demons would want to win, a chemical attack by Assad would only threaten his impending victory.

Today in Washington, we are faced with an unpredictable situation in which an embattled President Trump, who as candidate blasted the very type of military intervention he now purportedly supports, is facing a historically unprecedented challenge to his office by the very government organs in which he supposedly presides over. Weakened by endless scandals tied to allegations of collusion with the Russians and details of his sordid sexual past, the recent raid on the offices of Michael Cohen and the violation of attorney client privileges open the gates to his possible impeachment. These events coincide with the recent elevation of John Bolton, a renown warmonger obsessed with endless conflict, as the new national security advisor. Needless to say, the ground is set for a prolonged escalation of American military involvement in the Syria theater.

NOT IN THE AMERICAN INTEREST

This is the moment that every American citizen must ask themselves, what exactly is our interest in a Syria war? Will American security, or indeed, security in the West, be improved with military escalation in Syria? Clearly, the evidence of years prior when turmoil in Syria created waves of migrants entering Europe on Merkel’s behest, has proven otherwise. A strong body of evidence from recent history demonstrate that war will only create more refugees, more chaos, more radicalism and more opportunities for terrorism.

Will the removal of Assad’s regime improve peace in the region? Again, the evidence points otherwise. Despite all of his faults, Assad’s regime is a force for secularism in a region where religious extremism is rife. A Syria without Assad will likely be a theater of chaos where ISIS and other Islamist extremists will fill the power vacuum and turn the country into a training ground for future terrorists. Terrorists who may very well come to haunt us within our own shores. We have seen this cycle innumerable times before, in Afghanistan, in Iraq, in Libya, let’s not make the same mistake again.

Will an invasion of Syria increase American prosperity? Again, we only need to remind ourselves of the $6 trillion that was spent in the calamitous debacle known as the Iraq war, likely one of the greatest geopolitical mistakes in recent history. According to the 2017 federal budget, spending on medicare and health totaled $1.17 trillion, transportation was $109 billion, education was $85 billion and science was $32 billion. These numbers are all dwarfed by the amount that we spent on the Iraq war. That amount would have been able to pay for universal medical coverage, a national high speed rail system, revamping of our education system and enhance government support for scientific research many times over.

THE HUBRIS OF EMPIRE

During this period in history where our national debt is soaring past $21 trillion, growing economic insecurity amidst ever growing costs of living and unprecedented social and economic divisions in our society, a war in Syria should not even make it to the list of our national priorities.

Another war in the Middle East, one in which we depose another secular regime to create a power vacuum for Islamist extremists, will not improve the security of the American public but will endanger it.

Another war in the Middle East will not enhance American prosperity but will only damage it. It will significantly increase American national debt and detract valuable resources away from investing in crucial infrastructure that will be necessary to maintain economic competitiveness.

Another war in the Middle East will bring us face to face to the brink of war with Russia, a major nuclear power, and for what? So we can play judge and victor in the geopolitical struggles between Iran, Saudi Arabia and Israel in a region that is thousands of miles away from our shores?

As any student of history knows, it is through arrogance and hubris that empires fall. It is through the over extension of power and reckless adventurism, often perpetrated by manipulative elites who use the smokescreens of emotion and anger to fuel public support to further their own goals, that empires are led to the long journey of their own demise. With the rise of the information age and the vast resource of alternative narratives, there is no excuse for ignorance. There is no excuse for a citizenry to support a national effort that so threatens their own interests. A war in Syria is clearly not in the American interest and a major military escalation will only lead to disastrous consequences.