The unexpected victory of Donald Trump has jolted both American society and the global order like a lightning bolt. As Trump initiates his transition into the White House, an atmosphere of uncertainty, dread and in some parts, hope, abound both domestically and internationally.

An unorthodox demagogue challenged all of the conventions of modern day politics and won. His unpredictability continues to cloud how his incoming administration will change the status quo and the world we live in.

The Year of Populist Rage

The consummate opportunist, Donald Trump, tapped into a deep reservoir of anger at the political establishment and fears in some demographics of a changing society which vaulted him into the presidency. The 2016 election was the year of populist rage, with both major parties facing an unprecedented revolt within their ranks.

On the Republican side, Donald Trump, a brash celebrity businessman, utilized language of demagoguery and plain unfiltered talk to defy all norms of political correctness and public civility which energized his loyal followers who helped him upend the Republican establishment, an establishment, that continued to defy and battle their own candidate up until they were tamed by Trump’s improbable victory on election day. His campaign was often characterized by outbursts of long repressed sentiments of misogyny, xenophobia and racial hostility, causing widespread feelings of disgust and revulsion from the left.

In the Democratic Party, the populist revolt was led by a 75 year old socialist senator from Vermont. Bernie Sanders’ campaign, fueled by anger over the disenfranchisement of the American middle class and the deep corruption that has pervaded Washington, mobilized a passionate base of supporters that nearly defeated the expected crowning of Hillary Clinton as the party’s nominee. Bernie Sanders’ rebellion eventually faced insurmountable hostility from the DNC elite who were dogged by allegations of corruption, and only subsided just in time for the Democratic convention.

However, the anger and alienation felt by the Sanders’ crowd eventually came back to haunt Hillary on election day as voter turnout in crucial states was embarrassingly low and working class Whites, who formed a significant part of the Sanders movement, came out largely in support of Trump. Defying the polls, Trump cruised to an Electoral College landslide despite winning far fewer popular votes.

Trump’s victory destroyed the entrenched establishment of both major parties, with the winner now commanding obedience and loyalty of the Republicans, and systematically exiling the leadership of the Democratic Party, which now stands marginalized in all three branches of government and is thrown into utter disarray.

Donald Trump will be inheriting a deeply divided nation, in the aftermath of one of the most divisive and poisonous elections in history. More than any other, this election has exposed a yawning gap in culture, in worldview, in values between Red and Blue, and at the personal level, has led to increasing alienation and animosity even between family and friends.

The reaction to Trump’s presidency has consisted of massive street protests throughout a large number of American cities, in numbers unseen since the anti-war protests leading up to Bush’s invasion of Iraq. A sense of fear and anger has pervaded the cosmopolitan centers of Blue America, afraid of the consequences of Trump’s presidency for minorities and LGBT rights and leading to the critical mobilization of activist groups determined to challenge him at every step.

It is yet unclear how different Donald Trump the president, will differ from Donald Trump the candidate. Having to now negotiate and govern from the corridors of power in Washington is a world removed from the campaign trail in the rural Midwest.

What is clear, however, is that the tone of his campaign rhetoric which essentially brought the brand of the Alt Right into the mainstream, and the opposition it provoked from the Left, has created a volatile and incendiary atmosphere with a heightened level of distrust and anger at the “other.” Unfortunately, much of this tension has been brewing for years, but the lack of civility of this campaign, and the palpable fear felt by both sides have now brought this yawning cultural divide to the fore.

In order for this deeply divided nation to begin the process of healing, Trump, who many have characterized as an egocentric narcissist, will need tools that he simply lacks, such as a deep understanding of others and the ability to convey a heartfelt assurance to those who are dreading his rise to power. His tweets in response to the protests have done little to allay the near hysteric anger towards his victory.

In addition, it is unclear whether the Republicans, who now dominate all three branches of government, will even need the acquiescence of the opposition to push through some of Trump’s more controversial policies, particularly with regards to immigration and law and order.

Thereby, a perfect storm has been created led by factors that include the raw and gaping wounds of this highly emotional election, continued demonization of Trump and entrenched recalcitrance to his rule by his critics and their increasingly organized mobilization.

With his inability to bridge those gaps and the lack of political recourse open to his opposition, even his less controversial political programs may be met by continuing defiance and social turmoil, which may come to characterize American society throughout his term.

Nearly all presidential candidates of both parties from the last few decades, have been staunch adherents to the liberal world order that has dominated the Western world. This order championed free trade, globalization and liberal social values throughout the world.

Until Trump, not a single candidate has ever challenged this paradigm or the alliance system binding the United States and her European and Asian allies. However, like with most other political conventions, Trump, the candidate, consistently expressed a worldview that seemed to directly threaten that tradition. This peculiar reality was part and parcel to some surprising endorsements of the Democratic candidate, Hillary Clinton, by a series of leading neoconservative hawks for the first time in history.

Trump the campaigner was a volatile black sheep who threatened to upend where America stood on global issues that it had not only traditionally held, but had indeed spearheaded. Therefore, as Trump prepares to assume the presidency, an anxious world is filled with uncertainty, unsure what the consequences are for the global world order.

Throughout Europe, news of Trump’s presidency was greeted largely by abject shock and horror. Mirroring the victory won by Brexit, Trump’s rhetoric which often praised the rule of Vladimir Putin and disregarded liberal values, came as a deep shock to the European political elite.

Whether Trump the president will eventually back away from his more radical statements and eventually integrate into the Washington foreign policy establishment is unclear.

Regardless, the success of Trump’s campaign and Brexit represent a growing wave of populist nationalism threatening to overturn Europe’s liberal elite, already bolstering Marie Le Pen’s own far right campaign in France and similar movements in other European countries. This trend combined with a Trump Putin alliance, may hasten the fracturing of NATO and allow Russian influence to gain major ground on the continent.

However, as Europe sits in anxiety, it may be the Middle East where Trump’s victory has the greatest impact. Trump’s constant stance on non-intervention and criticism of both the Obama and Bush administrations’ policies of facilitating regime change point to the likelihood of scaled down military intervention in the region.

His victory was received with cautious hope by the Assad regime, as Hillary Clinton who had championed the hawkish neoconservative agenda, had made clear she would escalate military involvement in Syria against Assad and possibly institute a No Fly Zone which would have significantly raised the possibility of a proxy war with Russia. In contrast, Trump’s presidency has spoken openly of working with Russia in Syria to crush ISIS and allowing Assad to remain in power, thereby reversing the policy of regime change and destabilization, which has caused great chaos and carnage throughout the region.

Elsewhere in the region, Trump has already affirmed that he will continue America’s all weather alliance with Israel and in all likelihood, cement the already strong personal bond he has with Israel’s hardline Prime Minister, Netanyahu, who enthusiastically congratulated Trump on a widely seen video.

However, questions abound as to how a Trump presidency will impact the traditional American alliance with Saudi Arabia, who Trump has often harshly criticized for supporting radical Islamist groups throughout the region. On the other hand, Trump has also issued hostile remarks for Saudi Arabia’s arch nemesis, Iran, therefore how he plans to navigate the entangled mess that characterizes America’s involvement in the region remains murky at best.

In Asia, Trump has often been vocally critical of China’s trade policies and has threatened to label China a currency manipulator. However, the facts on the ground have changed in that the past decade has seen China move in the direction of greater domestic consumption and away from a dependency on foreign export markets, a move accompanied by a rise in the value Chinese currency. In addition, manufacturing is quickly leaving China as wages rise to lower wage countries in other parts of Asia. How a Trump administration will handle a complex bilateral relationship with the rising superpower remains to be seen.

Trump’s campaign has also induced anxiety in traditional Asian allies such as Japan and South Korea, who have been made nervous by the candidate’s rejection of the TPP and his criticism of American military commitments in the region. Whether a Trump presidency will continue Obama’s pivot to Asia remains unclear.

However, one traditional American ally, the Philippines, which had recently turned its back on the United States welcomed the victory. Duterte, the strongman president of the Philippines who has often been castigated as the “Filipino Trump” has already signaled the possibility of a possible rapprochement with the United States.

In Mexico, the country with the largest source of illegal immigration and the constant target of the candidate’s vitriol, Trump’s victory was greeted by a sense of dread and foreboding about the future of US-Mexico relations. In recent interviews, Trump has already affirmed that he will be immediately deporting two million illegals who have criminal records, although it is unclear yet how his plans for the wall and the repealing of NAFTA will be worked out. One thing is clear however, US-Mexico ties are due to deteriorate in coming years.

The rise of Donald Trump has introduced a whirlwind that threatens to completely undermine the foundation of the existing political and global order. Although the question hangs in the balance as to how much a President Trump will actually implement the often bombastic rhetoric of candidate Trump, one thing is clear, the paradigm has already shifted.

The political atmosphere of American society has become poisoned with intense hatred and widening polarization between both sides, the language of the Alt Right has crept into the mainstream, while public protest continues to challenge the result of our democratic system at a scale unseen since Abraham Lincoln took office.

Overseas, Trump’s campaign has invigorated a wave of rising nationalist movements in Europe who reject the values that the liberal world order was built upon, and US ties with Mexico are expected to hit new lows as deportations increase. Meanwhile, cautious hope has emerged in Russia and parts of the Middle East where Trump is believed to favor a route of non-interventionism, rejecting the aggressive campaign for regime change of his predecessors.

Because Trump the candidate has proved to be an unconventional and unpredictable maverick, it is difficult to say with confidence where we go from here. However, the tone of Trump’s campaign and pointed destruction of accepted norms in our political discourse have already unleashed an avalanche of raw emotion and a volatile mix of fear and anger that threatens to spiral out of control. As an anxious world looks on, American society in the Trump years may come to witness this widening rift between rival Blue and Red Americas grow into an unbridgeable schism. 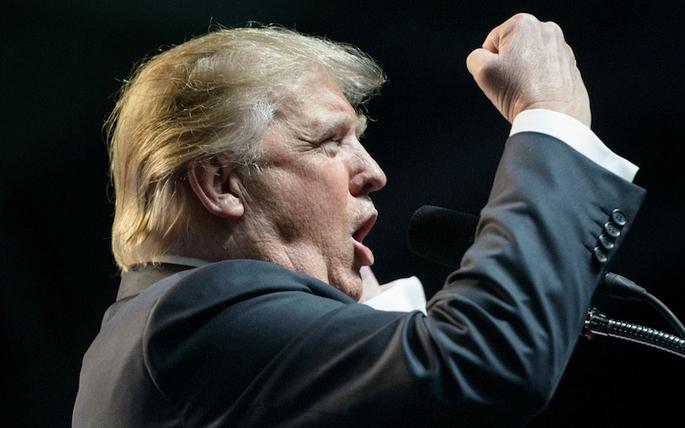